This technical post will offer a new view of common training objectives for generative adversarial networks (GANs), including a justification for the widely-used non-saturating loss.

The gradient of the discriminator

First, let’s look at the original GAN loss function and show that it’s simpler than it looks. As defined in Goodfellow et al. (2014), it’s

is the data distribution,

is the noise distribution,

is the discriminator, and

To analyze this loss function, we’ll use the same idea as in my post on the cross entropy loss: instead of looking at the function itself, we’ll look at its gradient.

by applying the logistic sigmoid function to a scalar output

This is quite surprising: by taking the derivative of

We can do the same calculation for the flipped probability 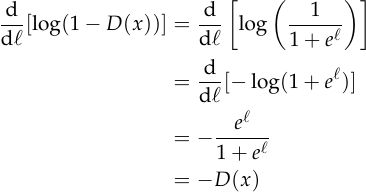 represents the parameters of the discriminator. The motivation for this definition of

is that it will let us write the full gradient

as the product where either

Now we can write the gradient of

This gives a clearer view of the GAN objective than looking at the original loss function. From this, we see that the discriminator’s goal is simply to increase

for real inputs and decrease

for fake inputs, with the caveat that inputs are weighted by their probability of being misclassified.

If we accept the principle that a model should weight its mistakes more than its successes, then there’s something not quite right about Though

In practice, equation 1 [the loss function which

is the gradient of] may not provide sufficient gradient for

to learn well. Early in training, when

can reject samples with high confidence because they are clearly different from the training data. In this case,

saturates. Rather than training

but provides much stronger gradients early in learning.

Though Goodfellow et al. motivate it differently, referring to vanishing gradients early in training, the idea is precisely the same: maximizing

by the probability that

is correctly classified by the discriminator. This is called the non-saturating loss and it is used ubiquitously, for example in StyleGAN 2 (Karras et al., 2020).

Like the non-saturating loss, it uses different loss functions for the generator and the discriminator:

here is the analogue of

previously. The gradient of the discriminator is:

You can see the similarity to the discriminator gets no gradient from examples where its prediction is correct and has absolute value greater than 1. This serves the same purpose as weighting by misclassification probability in it prevents the discriminator from continuing to focus on examples it already gets right.

You can also see why it’s necessary to use a different loss function for the generator. Otherwise, the generator would get no gradient from examples the discriminator confidently classifies as fake, which is precisely the opposite of what we want.

rather than when As I mentioned in the previous section on the non-saturating loss, this is justified by the principle that learning algorithms should focus on their mistakes over their successes, since from the generator’s perspective, the mistakes are the cases where

I’m not aware of anyone using this alternate loss. If you’ve tried it, let me know.

Now let’s consider the Wasserstein GAN (Arjovsky et al., 2017). WGAN can be obtained from the original GAN by making the following modifications:

In the original paper, WGAN is presented differently. Arjovsky et al. motivate it by arguing that we should minimize the Wasserstein distance between the data distribution and the generator distribution, then proposing to use an alternative representation of the Wasserstein distance to approximate it using the discriminator. However, I prefer this presentation because it makes it clear that WGAN is very similar to the original GAN.

Why is my formulation of WGAN equivalent to that of Arjovsky et al.? Their formulation is to learn a discriminator As in the section on the hinge loss, in this context I’ll define since

is the analogue of

previously. The objective for their discriminator is to maximize

and the gradient of this quantity is

which is equal to

without the weighting by misclassification probability.

is then an optimal discriminator

constrained to have Lipschitz constant

But there’s another way to look at the Lipschitz constraint: we can view it as a regularizer on the discriminator that keeps its gradients bounded and makes the generator easier to optimize. This view is supported by Kurach et al. (2019), which found that spectral normalization, a common way of enforcing the Lipschitz constraint (Miyato et al., 2018), helped all GAN variants in their study, not just WGAN: 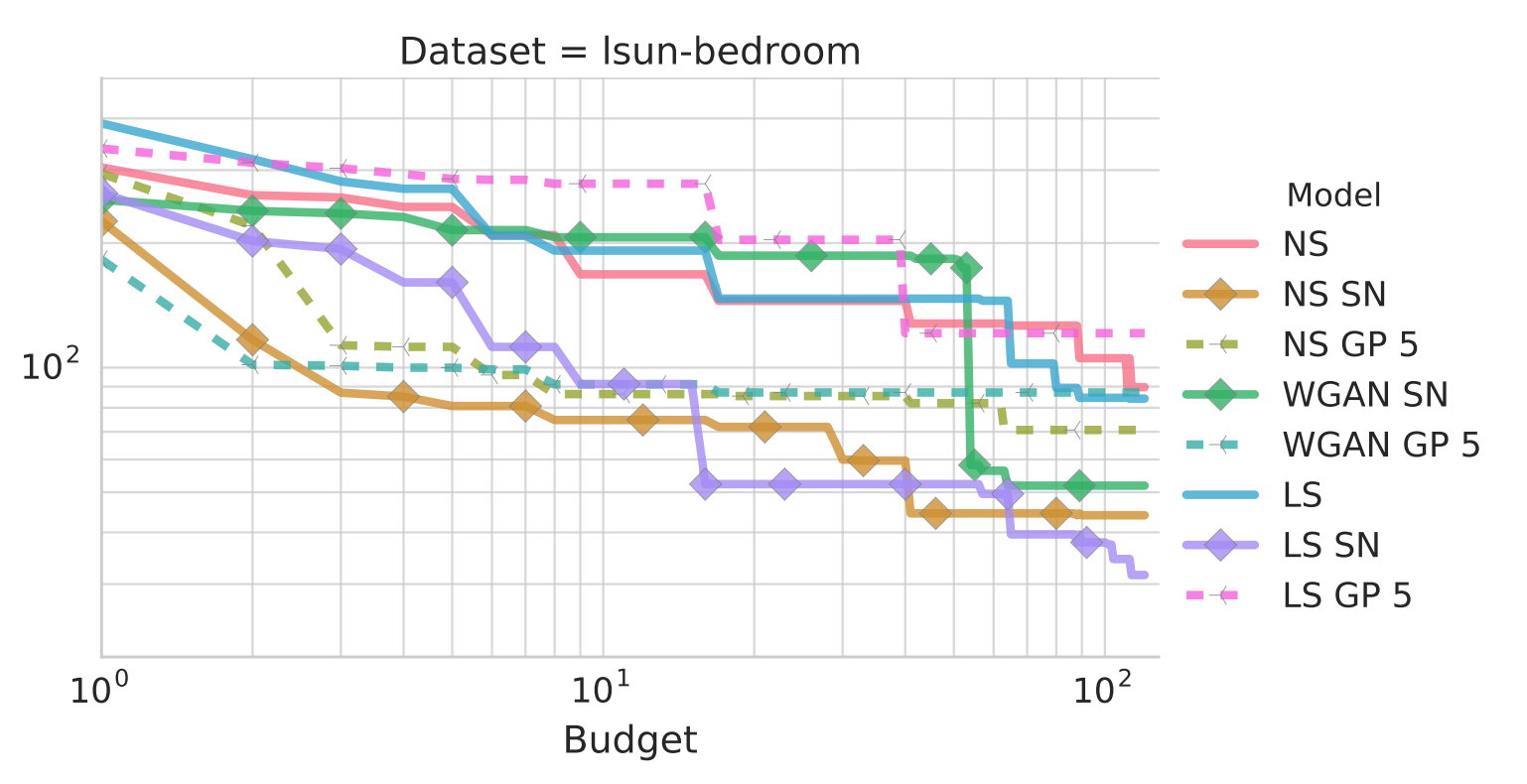 Hopefully this post has given you a new way to think about GAN objectives. If you liked it, you might also like this other post, which applies the same idea to the cross entropy loss.